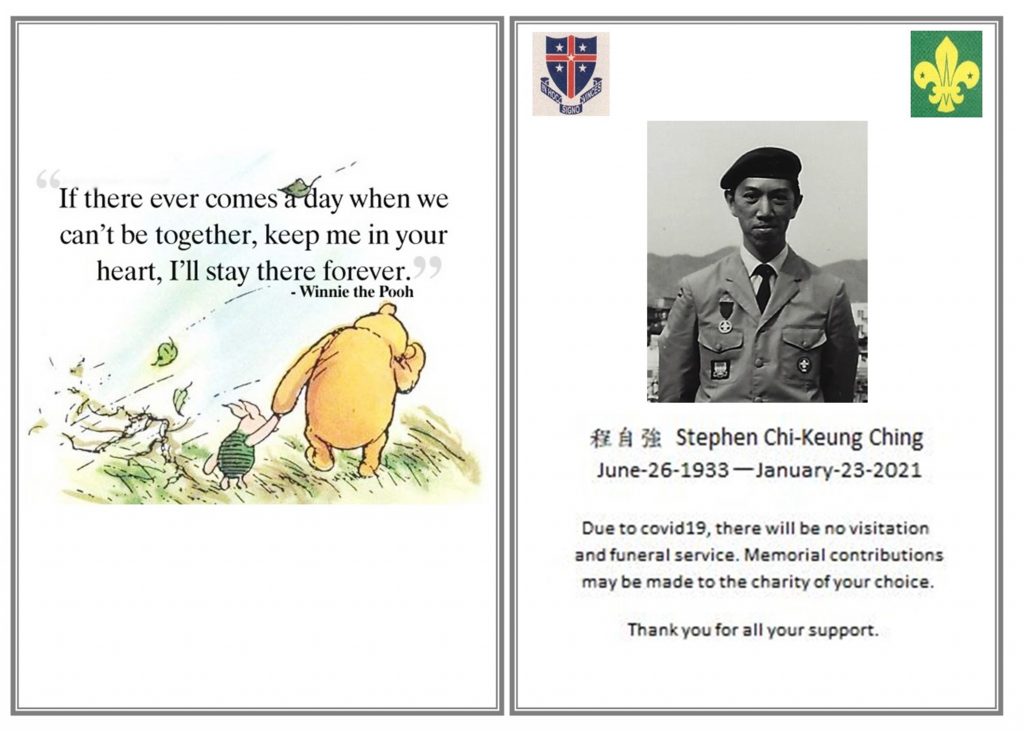 A few weeks after I joined the 15th Group, I saw this tall man attending our weekend meeting. He caught my attention because he was tall, and he was wearing a pair of dark blue shorts as part of his uniform. We, at the time, were wearing our all-grey uniform. I saw the red cap badge on his beret so I knew he was an Assistant Scout Master. Then I was told he was Akela, and I thought, “Hmmm, interesting name”.

Soon, I learned that his name was Stephen Ching. Akela was his title. He was the leader of the Cub Scouts. He also had a nick name: 長腳.

Besides being one of the ASMs, Stephen was also the Commissioner of the Island District. Stephen did not show up regularly for our weekly meetings. However, whenever he showed up, he gave us tremendous fun and taught us valuable skills. I remember that a small group of us were being trained to participate in a district competition. He quietly sat by, did not say a word, just watching us. Later, I found out that he was observing, to assist in selecting members to make up the patrol for the competition.

I lost contact with him and all others when I migrated to Canada. One day, I ran into Stephen on the subway in Toronto. We exchanged phone numbers, which was basically the only communication tool then. We talked once in a long while as we were both busy settling into the new environment.

Many years went by, Stephen told me that there were many old scouts from Hong Kong living in Toronto. They formed a group and were meeting regularly. I was quite occupied at the time so only attended their dinner functions three, may be four, times. A few more years went by, I started attending the Wah Yan Past Student Association meetings, of course, because Stephen told me to.

Since then, I saw Stephen more and more often, as he participated in every Wah Yan events. He gave advices to the executive committee, helped organizing events and most importantly, got people to attend! Seems strange that he never wanted to be the President.

There were only two things on Stephen’s mind – Wah Yan and Scouts. Those were all he talked about. He got excited when Wah Yan Scouts won championships. He would share the good news to every old scout he knew. Everywhere he went in the world, he fist wish was to meet up with old boys and old scouts. He remembered a lot of people and had lots of stories to tell.

Stephen was gentle, kind, religious, caring, loving and hard working. Anyone looking for an example of a “good man”, Stephen is it. I will sure miss him.  長腳

Though many of us are saddened by the recent hectic and disturbing incidents in HK, the TSW Tutorial Project, which our class initiated, has continued to flourish and we are venturing into our 12th intake coming October. I am therefore writing again to check if anyone of you are free to join as a tutor or substitute tutor in either our onsite or  online program.

Some of you have just retired and some may have retired for some years, have rested or done enough travelling and would like to consider doing some meaningful volunteer work. Why not join your many classmates and alumni who have helped in this project and share your knowledge in English as well as your challenges in life with the many underprivileged students in TSW and Kwai Chung so that hopefully, with your influence, they can follow your footsteps to become responsible and careered HK citizens.
Please have a look at our project website below and if you have any question, call me or Tak Eng who will be most willing to provide you with answers. Hope to hear from you soon.

This windbreaker is made by Simon Cheng (’72) and is an unofficial souvenir for the centenary event. It is made for WYHK 100. Simon said that it is free for anyone, but a donation to WYHK is expected. We are expecting an minimum donation of $40. They come with various sizes from XL to Small.

Paulus Ng is coordinating the ordering and collecting of the donation for the wind breakers . All the money collected will be given to WYHK when he goes to Hong Kong this November.

The Executive Committee is inviting all member to attend the 2019 Annual General Meeting to be held on October 16, 2019 at 6:00pm at Golden Court Abalone Restaurant (黃金閣), 270 West Beaver Creek Road, Richmond Hill, Ontario.

Since a lot of members will be returning to Hong Kong to participate in the centennial events, there will not be an annual dinner here in Ontario this year. However, all those who attend the AGM are welcome to stay for dinner at 黃金閣 after the AGM.

Please contact Paulus by email (paulus4599@gmail.com) if you:
1. Want to become a member of the Execute Committee;
2. Want to attend the AGM;
3. Want to stay for dinner after AGM.

It is important that we receive your reply before October 5, 2019 so that we can reserve seats with the restaurant.

This year, it will be the 100 years Anniversary of the Wah Yan family as well as the 100 years Anniversary of Wah Yan College Hong Kong. Please do your best to come back to Hong Kong for this biggest celebration for Wah Yan for this century if you are in overseas. If you are in Hong Kong, please mark it on your diary and remember to come back to take part in this WYIR so you can :
1. have a look on the new School face and feel the development of your mother School after you leave.
2. discuss together how you can help the future development of the School and the younger generation Wahyanites
3. meet the Wah Yan Brothers coming back from Overseas such as North and South America, Europe and Asian Countries
4. visit one of the most famous and biggest Chinese Multinational Investment Holding Conglomerate and Technology Company in Shenzhen
5. join thousands of Wahyanites to Celebrate the 100 Anniversary of the Wah Yan family.
6. meet the Fathers and teachers who taught us years ago

Please help to disseminate this message to all your classmates, schoolmates you know in Hong Kong and Overseas. We are looking forward to seeing you between November 29 and December 01, 2019 or any time during the 100 Anniversary Celebration year from September 2019 onward.

Wahyanites stay connected - a message from the principal

Once a Wahyanite, forever a Wahyanite!
As we prepare to celebrate our Centenary, we would like to update your contact and personal details so that we can keep you informed of our upcoming anniversary events in the anniversary year (school year 2019-20) as well as news and ongoing development of the school in the years beyond.
Taking this chance, we would also like to solicit your inputs to enrich the repertoire of ideas, quotes, stories, photos or artifacts to facilitate planning for our publications, heritage centre and other possible commemorative production items.
In this regard, please go to our website: www.wahyan.edu.hk and click on the designated page under the tab “Centenary Celebration” on the left to access the online form.

Registration for classes has started. Please contact your class representative to join in.

We are forming an Ontario Table! Please contact Tony Tang (ttang@rogers.com) or Stephen Ching (stephen_ching18@hotmail.com) at your earliest convenience if you want to join this table. There are limited space left so please register before end of April to avoid disappointment.

There were more than 20 karaoke singers from different schools. Robert Lo represented our school and sang two beautiful songs. His classmates and old friends cheered on as they have not heard him sing for a long time.

Our president Andrew Ng was surprised by the birthday cake they had to celebrate his birthday. Do not know what wish he made.